I was born and lived in Hungary until 2018. The first time I heard about refugees was in 1988-89 when ethnic Hungarians escaped from Ceausescu’s Romania where his frantic dictatorship reached its last phase: demolishing Hungarian villages in Transylvania. 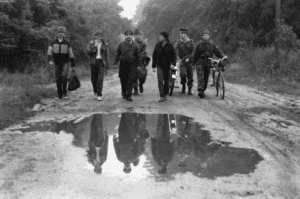 Transylvania historically belonged to Hungary until the end of the 1st World War, and always had a high proportion of Hungarians in addition to Romanians, Jews, Roma, Saxons, etc. All these ethnic groups lived together – mostly in peace – over centuries. Those who escaped were mentioned in the media as “Transylvanian refugees”, they were Hungarians, most of them having relatives and networks in Hungary. The state supported their relocation in several ways. There was no question for the general public that they should have their new and safe home in our country, I remember a lot of charitable actions as well.

Something very similar happened during the Balkan wars, especially between 1991-95. In Vojvodina (Northern Serbia), the proportion of the Hungarian ethnic minority is relatively high (for the same reason: this territory used to belong to Hungary). People ran away from the violence of war, the increasing ethnic hatred and conflicts, and — young men in particular — to avoid compulsory military service. But again, we Hungarians thought of them as our people, from our nation, language and culture, who looked for safety in their “motherland”.

The big “shock” happened in 2015 with the so-called refugee crisis; people mostly from Syria but also from Afghanistan, Iraq, and Pakistan reached Hungary through the “Balkan-route” (Greece, Macedonia, Serbia and Hungary). Importantly Hungary is the first country on this route within the Schengen Zone, so it is the gate to the European Union and free movement, Germany and Sweden, in particular, are choice destinations for refugees. 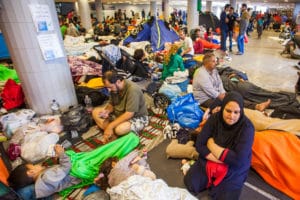 I remember clearly; all of a sudden people (from different cultures, religions, being in very bad condition and in great need) appeared in Budapest, primarily at one of the central stations and at nearby parks. They slept rough on the train station floors or in the grass with their kids.  Their numbers grew day-by-day and it was a very hot summer. They were not scary in any way, but undoubtedly needed help: food, shelter, sanitary and medical services.

The Hungarian authorities were loath to support those in need. Prime Minister Viktor Orban’s anti-migrant rhetoric and hatred-based politics were starting to bloom and helping (predominantly) Muslim refugees did not fit the government’s narrative or aid in the image they were projecting.  That said, I was impressed by the many Hungarians who did amazing things to help the new influx of refugees. Among my circle of friends, there was not one of them who wasn’t willing to help in some way that summer.  Those were heroic times, proud times.

Ordinary people brought clothes, food, or just came to play with the kids at the stations. Doctors on their summer holidays worked day and night to provide basic medical support. It became a habit of many to buy extra food and sanitary supplies when shopping to donate at collection points which volunteers set up. Young people cooked in Budapest basements and distributed food for the refugees.

The director of a Budapest homeless shelter (without permission and thus risking his job) opened the shelter during the day for refugees to use showers and bathrooms. I volunteered at this place; we were able to provide sandwiches, tea, and a peaceful space for breastfeeding women and their babies.  It was touching to see homeless Hungarian people, residents of the shelter, come and offer food they did not need from the kitchen.  An enduring image in my mind is of a homeless man in a wheelchair taking little kids “for a ride” breaking the boredom of waiting in the long bathroom queues.

Starting in September 2015 the situation changed and got worse and worse. I will only touch on the most significant elements of this shameful process that was accompanied by a viciously exaggerated government propaganda campaign against refugees; “They want to take over our country!”, “They are all terrorists and rapists!” and, more surprisingly, “They are related to George Soros!”  The refugees were, and are, still cast as conspirators bent on destroying Hungary.  This is a summation of the key ideas, largely detached from reality, that the government’s campaign eschewed. 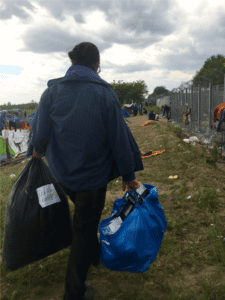 Distributing donations at the fence, on the Serbian side. Photo credit: Eszter Kósa

In 2015 the Hungarian government built a fence on the Serbian-Hungarian border. Asylum applications from refugees on the Serbian side gradually reduced from 40 persons a day to only five.  Reductions in applications resulted in hundreds of human beings waiting at the fences without any shelter or running water, sometimes for months.

In 2016-2017 the Hungarian government closed reception centres and detained all asylum seekers at the border. Conditions in these detention facilities are inhumane; people are starved and children’s rights and safety are not guaranteed as several international organisations have noted, including a recent report from the Council of Europe Commissioner for Human Rights. The Hungarian government has even imposed restrictions on civil society and NGOs to help or respond to the crisis. Though it is important to note that when they had access to the border areas and the detention camps, civic organizations and volunteers were amazingly helpful, and saved lives.

I have many memories of the refugees and the time spent with them.  Most are of the unaccompanied minors and families we met.  Listening to their stories we tried to help. I know we made a difference; we helped children be children – to play, to learn, and created for them safe and loving environments. We helped families start new lives, find work, and raise their children in peace.

What disappoints me the most, and it truly disturbs me, is how public opinion was manipulated and changed to something dark and ugly.  People use the propagandists’ rhetoric; ‘fear of’, ‘hatred toward’ and ‘turn them all away’ to characterize their sentiments toward refugees, migrants, and for that matter any stranger.  The irony infuriates.  This is the same nation that went through the trauma of people having to “run away and leave everything behind” twice in the last 30 years, and welcomed those refugees with warm and open arms – they were ethnic Hungarians, not people of colour or of other religions. We are a nation of people who have become insensitive to human suffering and are no longer willing to be generous or charitable.

When I recognized that shift in opinion was becoming an avalanche of public sentiment, I avoided discussion of my work.  My work, which I loved, was helping refugee children who were fleeing war zones, wanting nothing but to live.  Among my own people, I knew that engaging them in a discussion of my work would be met with, at best, dismissive derision and at worst open hostility.

In 2018 the Hungarian government introduced the so-called “Stop-Soros Law”.  It effectively stigmatizes and even criminalizes civic initiatives that provide support to migrants and refugees. It was the last straw for me. And I feel for those that remain that sharing my compassion and desire to help people in desperate need.  But we had to leave the country – not as refugees, but as EU citizens – Not on foot over thousands of kilometres, but on an aeroplane.

Eszter Kósa is BCI’s Programme Manager who has spent her life fighting for social justice.  She and her family moved to Malta in 2018.