When Donald Trump declared his candidacy for the Republican Party’s nomination in July, policy analysts and media outlets treated the news as a joke. One major digital news site, the Huffington Post, announced it would cover Trump’s campaign in the entertainment section. Six months later, Trump is the leading Republican candidate. He has consistently disproven nearly every pronouncement of received wisdom offered by policy analysts and journalists. In a volte face that seemed beyond the real of possibility a few months ago, he is now the likely nomination for the Republican presidential race. 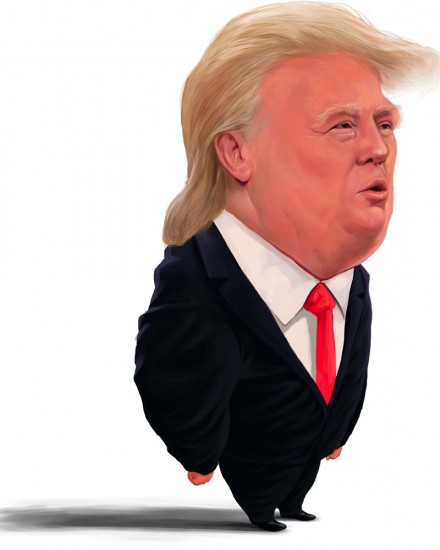 Since July, the billionaire property developer and reality television star has given speeches and made statements that included gender-based insults directed at women, including Hillary Clinton and Fox News presenter Megyn Kelly. He declared that if he were elected president he would build a wall on the border with Mexico, to keep undocumented immigrants out, and that he would force the Mexican government to pay for it. He called on President Obama to bar all Muslims from entering the United States. During a speech at the Republican Jewish Coalition, he made anti-Semitic jokes. And during at least one campaign stop, he gestured toward reporters standing in the media section and told his audience, “I hate them.” The audience cheered.

In recent days, Trump has received praise and endorsements from Tea Party evangelical politician Mike Huckabee and from Sarah Palin, who was John McCain’s running mate in 2012; she is widely credited with having destroyed his candidacy with her volatile behavior and inappropriate public remarks.

While the British parliament debated the motion to make Trump persona non grata in the United Kingdom, Vladimir Putin came forward to endorse the Republican candidate. The Russian leader said the blunt-spoken New York billionaire was “a colorful and talented man” who “wants to move to a deeper level of relations with Russia.”

But despite Trump’s unabashed misogyny and racism, his blatant populism, the dubious nature of his most vocal supporters, and his failure to articulate a policy platform beyond the campaign slogan, “Make America great again,” Donald Trump’s popularity continues to rise.

Serious policy analysts who six months ago dismissed his candidacy as a joke are now saying he is well positioned to take his party’s nomination for the 2016 presidential race. Across the country, Trump’s supporters queue up for hours in advance of his speaking engagements, filling the venues to capacity and cheering him as though he were a rock star. The New York Times published a feature story on him in their prestigious Sunday Magazine. And Jeb Bush, the Florida governor and brother of former president George W. Bush who less than one year ago was considered a shoo-in for the Republican nomination, has been reduced to an insignificant candidate.

The U.S. media is appalled. It was Trump’s statement about Muslims that led Huffington Post publisher Arianna Huffington to announce last month, in an article titled “We are not entertained,” that her news site would henceforth cover Trump’s campaign in the news section. Even prominent conservatives Republicans view Donald Trump as anathema. The National Review, founded by prominent conservative analyst William F. Buckley, last week published a cover story titled “Against Trump,” featuring a series of editorials by leading right wing political analysts expressing their abhorrence for his candidacy.

But the mocking comedians and the horrified opinion pieces serve little purpose beyond pandering to the already converted and providing validation for Trump’s angry, disaffected supporters.

And Trump is very, very confident of his supporters’ loyalty. This week, at a campaign stop in Iowa, he said, “I could stand in the middle of Fifth Avenue and shoot somebody and I wouldn’t lose any voters.” No one contradicted him.

He is so confident, in fact, that he doesn’t believe his campaign will suffer for his having pulled out of this Saturday’s prime time debate on Fox News. On Tuesday Trump’s campaign announced abruptly that, rather than participating in the hotly anticipated event, he would host a fundraiser for wounded veterans of the U.S. military.

Trump’s cancellation comes on the back of a five-month running feud with Fox News anchor Megyn Kelly, who asked him some pointed questions about his misogynist remarks in a previous debate. Fox refused Trump’s request to replace Kelly in the upcoming debate, but rather than framing his cancellation as an expression of anger, Trump framed it as an example of an outsider sticking it to the establishment. “Why,” asked the billionaire from New York, should the networks get rich on the debates? Why do I have to make Fox rich?”

Whether by accident or design, Trump is a brilliant populist. He has tapped deep into the fears and the rage of white, primarily working class, Americans.

After years of wage stagnation and rising prices, survey after survey shows that fewer than half of Americans are able to afford the cost of living. More than three quarters live from paycheck to paycheck, while 14.5 percent live below the poverty line. White working class men between the ages of 45-55 are actually seeing a rise in mortality rates, primarily due to suicide and drug abuse. The social fabric of the working class is tearing.

The question is, why would a billionaire who disparages women be so popular with both genders. The answer is somewhat unquantifiable, since as a populist he appeals primarily to emotion rather than to reason. Trump presents himself as a self-made man, a blunt spoken truth teller and a man who is unafraid to articulate the racist thoughts they hesitate to voice. He also says things that women can identify with. For example, he has criticized Hillary Clinton for remaining by her husband Bill’s side despite his many extra-marital affairs. Trump accused her of staying in the marriage for reasons related to political opportunism, which in the eyes of many undermines her claim to be a feminist. He has also expressed empathy for the poor and abhorrence for the wealth gap. But whereas Democratic candidate Bernie Sanders blames income inequality on Wall Street and corporations, Trump blames it on poor governance and corruption politicians.

Some policy analysts have posited that American exceptionalism will act as a brake on Trump’s political ascendance. But a number of prominent academics such as Yashca Mounk, who lectures in political theory at Harvard University, believe that Americans are losing faith in democracy and swinging toward the view that there are desirable, non-democratic alternative models of governance.

In an article co-authored for Vox.com, Mounk presents research that shows a steep decline in democratic values in the United States — particularly among younger Americans, fewer than 30 percent of whom say that living in a democracy is essential. One in six Americans thinks it would be a good idea to have the Pentagon rule the country. We see these illiberal trends in European society as well, of course. Trump’s brand of populism is uniquely American perhaps more in style than in substance, with his blustering self-promotion and vulgar remarks about women, Mexicans and Muslims. But his political views are quite similar to Marine Le Pen’s, for example.

Could we see a President Donald Trump in the White House next year at this time? The idea is frightening to many. But it is no longer beyond the realm of possibility.

Lisa Goldman is a journalist and policy analyst who is a contributing editor at +972 Magazine and former project director at New America. A Canadian who lived for over a decade in the Middle East, she is now based in Brooklyn. Follow Lisa on Twitter.