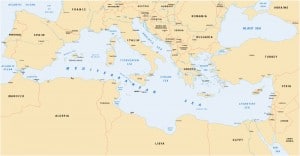 Forty years ago in Helsinki, international leaders signed an agreement on mutual security and cooperation in Europe. With the involvement of the superpowers of the day, one can assume that arriving at an agreement was no easy task. However, the superpowers were not the only prominent voices in the room. The delegation from a small island in the Mediterranean proved to be a driving force in the deliberations over the content of what would become the Helsinki Final Act. Under the visionary (some may say stubborn) leadership of Prime Minister Dom Mintoff, Malta insisted that the security and cooperation of Europe were intrinsically connected to the Mediterranean and the non-European states that shared the sea. The efforts of Malta, punching well above its weight-class, ensured the inclusion of the Mediterranean Chapter in the final version of the Helsinki Final Act – the foundational document for what would later become the Organization for Security and Cooperation in Europe (OSCE).

While Mintoff and his team’s effort proved successful in the inclusion of Mediterranean interests in the Helsinki Final Act, it is clear that over the following forty years the efforts of the CSCE and later the OSCE focused primarily on issues in Eastern Europe, with Mediterranean issues taking a backseat. Since 1998 no non-member states from the region have been added to OSCE’s Mediterranean Partnership. Meanwhile, the expansion of OSCE member states into Central Asia has steadily grown — most recently with Mongolia’s acceptance to the OSCE in 2012. Comparing the distances of Ulaanbaatar and Tunis to Vienna, it is hard to imagine why a country like Tunisia has not yet joined the OSCE as a member state.

For too long, the Mediterranean Sea has been viewed by Europe as a border that must be protected – most recently from waves of migrants and extremists. It is increasingly apparent that the assessment of the Mediterranean by successive Maltese governments is more astute and applicable. Namely, that the Mediterranean is not a fence dividing us from them, but a doorway connecting us. This perspective is particularly apt when considering the current turmoil experienced in the countries on the southern shores of the Mediterranean.

Enhancing mechanisms to support the countries on the southern shore should be a vital component of the OSCE’s strategic objectives in the coming years. In recent years, the OSCE has provided relevant and significant support to emerging democracies in Eastern Europe as both organizers and conveners of elections and as vital monitors of human rights and fragile political processes. The Organization has, recently, given a timid head nod to questions of the Mediterranean. OSCE’s Mediterranean conference hosted in Amman last month is a positive step, but the conference’s focus on issues such as violent extremism, irregular migration, and refugee protection was short-sighted – failing to address the even more difficult challenges on the horizon. Energy and environmental (in)security are the looming issues that will threaten the stability of Europe in the coming decades. These same issues will affect the states on the southern shores and, in turn, will amplify the challenges for Europe. Shortages of carbon-based energy and the increasing effects of climate change will ultimately emerge as the principal areas of concern and test the stability of Europe as well as the fortitude of multilateral institutions such as the OSCE.

Addressing these challenges in the Mediterranean should not be limited to mechanisms of cooperation on technology, military and counter-terrorism. The OSCE’s Office for Democratic Institutions and Human Rights (ODIHR) has a significant role to play in the Mediterranean. It is not far-fetched to say that states who fall short on creating sound institutions of governance, based on the principals of democracy and human rights, will struggle to address these future challenges and the demands of their citizens and, thus, be the likely fulcrums for greater instability in the Mediterranean. The 2010-11 uprisings across the southern Mediterranean may have simply been the first act of what is to come if governments do not address the issue of good governance. It is concerning that, of the eight current OSCE Mediterranean partner states, only Tunisia has established a relationship with ODIHR.

Forty years after the signing of the Helsinki Act, the notion of what the Mediterranean means to Europe is again a topic of debate. Is it a border or part of Europe? With the challenges of terrorism and migration in the limelight, it is possible that the argument of the Mediterranean as a border to defend may carry the day. Once again a little island in the Mediterranean can be a driving force in this discourse and change how Europe views the Mediterranean. In 2017, Malta will assume the presidency of the European Union. How the EU engages with the other principal multilateral institutions of Europe, NATO and the OSCE, on the challenges facing the Mediterranean, in particular the southern shore, will be of the utmost importance. Malta must again lace up its gloves and start punching – or be forever haunted by the ghost of Dom Mintoff.

Frank Talbot is a graduate student of Conflict Analysis and Mediterranean Security at the University of Malta’s Mediterranean Academy of Diplomatic Studies (MEDAC). He is the principal at Talbot Advisory International, LLC