This week I made a quick trip to Sofia, Bulgaria at the invitation of the National Democratic Institute for International Affairs and the Friedrich Naumann Foundation for Freedom for Southeast Europe . 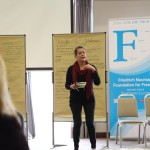 In Sofia, I facilitated working sessions of the Steering Committee of the Liberal South East European Network (LIBSEEN). The network is part of the larger European family of Liberal parties and is an alliance of liberal parties and think tanks in the region, founded in Skopje, Macedonia in 2008. The network gathers liberal parties of the Balkans to share ideas and best practices on strengthening Liberal values in their respective countries and throughout the region.

During the discussions (formal and informal), I was struck by the enduring solidarity among participants from different countries in South East Europe. Of course, representatives of Liberal parties share the same values and similar goals, but political activists from the Balkans share a particular history and unique challenges that differentiate themselves from their Western European peers. The countries of the Balkans have, over the last 20 years, travelled various paths with wildly different results. A few, like Slovenia, Romania and Bulgaria, are full members of the European Union (EU) with Bulgaria and Romania slated to chair the presidency of the Council of the EU in 2018 and 2019 respectively. Other countries, like Macedonia and Montenegro are grappling with institutional and economic malaise, which hamper their candidacies for EU membership. Bosnia & Herzegovina and Kosovo are two countries in the Balkans that continue to confront the legacy of conflict as they endeavour to build and consolidate peace. Despite the different political contexts in which the LIBSEEN activists exist, there was an inspiring expression of collective responsibility to each other and an expectation that, like any family, the network embraces that responsibility passionately.

It was great to be back in the Balkans – despite the freezing winter temperatures and the snow!

On another note – congratulations to the Friedrich Naumann Foundation for Freedom for Southeast Europe on receiving special award this week from Forbes Magazine! FNF was recognised for its work on fostering economic freedom in Bulgaria. Photos of the awards ceremony can be found on FNF’s Facebook page.