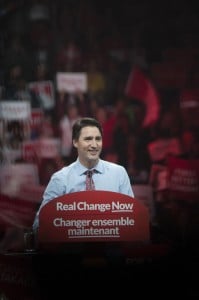 Now that the world’s media has had fun with writing and talking about whether Canada’s new prime minister is the sexiest or is the only world leader with a tattoo, it is time to ask what the consequences of Canada’s new government might be, particularly on the international scene.

The new government and its leader – Justin Trudeau – signify generational and ideological change after almost ten years of far right conservative rule. It is often said, though, that Liberals campaign on the left and then govern on the right. While Mr. Trudeau’s government will certainly be more progressive than its predecessor, how different will it be?

The 42nd Parliament of Canada will look a lot different than the 41st. Of the 338 MPs elected on October 19, 199 are first-time MPs. The percentage of women inched up ever so slightly to 26% (although Trudeau has stated he will appoint a gender-balanced cabinet), almost half the parliament is under the age of 50 and the percentage of visible minorities increased from the last parliament. All of these differences create high expectations for a country whose voters wanted one thing: Change.

This magnitude of change, while desirable to Canadians, is fraught with possible pitfalls for a new prime minister who has gained international rock star status before he is even sworn in. Just ask Mr. Obama how the reality of governing has a way of dampening expectations. In all my years of living away from Canada, I have never seen such international media attention to the election of a Canadian prime minister. Elections in Canada usually gain a mention by the BBC – our trusted Commonwealth broadcaster – but rarely the headlines witnessed in the last couple of weeks. This attention may just be the result of our celebrity-obsessed social media age, but I think it speaks to a deeper sense of relief that perhaps Canada will return to its role of global “nice guy”. So what kind of change, if any, will the world see when Canada comes to the international table?

Foreign policy rarely figures prominently in many countries’ national election campaigns, and Canada is no different. For this reason, only time will tell what impact the new Liberal government will have on it’s relationships with the rest of the world. From everything Mr. Trudeau said during the campaign, he is a “team player”. His team – the cabinet – will be more visible within Canada than outside. On the world’s stage, perhaps the foreign minister (speculation is he will be a former astronaut) will receive attention, but Mr. Trudeau will “carry the can” and Canada will be judged by his beliefs and values. In my view, the beliefs and values of the outgoing prime minister contributed to the declining world reputation of my country.

While living in the Middle East for most of Harper’s term as Canadian prime minister, I was constantly confronted by friends and colleagues who could not understand Canada’s unwavering and unconditional support of Israel and antipathy towards the Palestinians – often more so than his conservative American peers, and usually out of step with Europe. The best explanation I had was that, unlike George Bush, who is a born-again Christian, Stephen Harper was born that way. His fundamentalist Christian values often dictated his position on policy issues, particularly social issues and his support for Israel.

Support for Israel aside, it is apparent to many Canadians living abroad that our international star has waned over the last decade. Under Harper, Canada went from being a world leader on peacekeeping issues, leading the way on banning land mines, campaigning against apartheid to a country that turned its back on the United Nations, decreased development assistance and neglected the military and diplomatic services.   Mr. Trudeau has vowed to restore Canada’s leadership on the world stage.

Specifically, Trudeau pledged to step up Canada’s support for Syrian refugees by increasing humanitarian support and welcoming 25,000 more refugees from Syria.   Canada has a long and proud tradition of welcoming those displaced by conflict and tyranny and many were shocked during the campaign to learn that Aylan Kurdi (the two-year-old Syrian, the photo of whose dead body on a Turkish beach shocked the entire world) and his family had been caught up in the increasingly politicised and discriminatory asylum process. Critics of the Conservative government suggested a more humane refugee regime would have allowed the Kurdi family to board a plane for Canada instead of a rickety boat for Europe.

Canadians’ despair over their government’s treatment of Syria’s refugees is coupled with their distaste for Canada’s military role in combatting terrorism in the Middle East. Although Mr. Trudeau supported a controversial domestic anti-terrorism bill, he pledged to withdraw Canada’s combat mission in Iraq. Less than 24 hours after his election, he reconfirmed this commitment by informing the U.S. President he will carry out his campaign promise. Without giving any details on timing or mission scale down, Mr. Trudeau said Canada would continue to support the fight against ISIS in other ways. Lest anyone think that halting combat missions in Iraq means that the new Liberal government will shy away from other military commitments, during the campaign the party pledged to continue Canada’s existing military contributions in Central and Eastern Europe. Specifically, to continue Canada’s participation in NATO assurance measures and training missions in Ukraine. Given Canada’s large population of Ukrainian heritage, we can expect to see continued engagement in supporting efforts to support democracy and stability in Ukraine.

How different the new government’s relationship will be with Europe on trade issues is unclear. It wasn’t an issue during the campaign. Many Canadians think of Europe as somewhere they – or their relatives – came from and are grateful they don’t need visas to visit. Any campaign discussions of trade were centred on the Trans-Pacific Partnership (TPP) agreement, which was concluded towards the end of the election campaign. Mr. Trudeau was uncommitted and pledged to review the agreement and put it to a parliamentary vote. Post-election punditry suggests the new government will likely pass the agreement. On trade, in general, Mr. Trudeau campaigned on an “open for business” platform – as long as it benefits Canadian businesses and farmers. The devil is always in the detail.

One issue raised often in the campaign, that will interest outsiders and where Canada’s reputation has taken a hit over the last few years, is the environment.

They say it takes years to build a good reputation and can take only a moment to destroy it. For Canada, that moment came in December 2011 when Canada’s Minister of the Environment announced his country’s withdrawal from the Kyoto Protocol.  Harper’s indifference to the urgency of climate change, in general, and opposition to Kyoto specifically was well known. But few expected Harper to reverse a treaty that the Canadian parliament had ratified four years before his ascent to power. The withdrawal from Kyoto shocked the international community, which saw the previous Liberal government actively involved in the 1997 Kyoto negotiations.

Given this is Canada’s starting point, Mr. Trudeau won’t have to do much to improve Canada’s contribution to combating climate change. Expectations must, however, be tempered by understanding that the Canadian government’s ability to make significant and effective environmental policy is hamstrung by the Constitution, which gives management of natural resources to the provinces. Mr. Trudeau has vowed to work with the provinces – some of which have leapt ahead of the federal government in protecting the environment – and he will need the cooperation of provincial premiers. While campaign promises on the environment were vague and the Liberal party vowed to “take action to reduce greenhouse gas emissions” and “to develop real climate change solutions, consistent with our international obligations”, Mr. Trudeau did pledge to establishing federal emissions-reduction targets and to provide federal funding for provinces to meet similar commitments.

Although the new Canadian prime minister has stated he will attend the Paris climate conference at the end of November, don’t expect any substantial or concrete commitments. If you want to know the direction Canada will be going on climate change, pay attention to which provincial premiers join the prime minister at the conference and to what (if anything) they commit. Besides that they are the political power where the environment is concerned, they have had time to prepare for the conference. In the month before the Paris summit, Mr. Trudeau has to focus on the transition to a new government and begin to address many domestic political issues in a climate of high expectations. It is unlikely he and his team will come to Paris with more than good will and willingness.

I believe Mr. Trudeau has a genuine interest in restoring Canada’s reputation around the world and improving the country’s contributions to solving global issues. His personal background and experiences suggest he has a more internationalist outlook than the provincial and insular Mr. Harper. Mr. Trudeau was dismissed early in the campaign by his opponents as a lightweight and not ready for prime time. It is a mistake to underestimate him or those on his team. As leader of the Liberal party in opposition, he took bold and risky decisions, which paid off. He now has a convincing mandate to implement his campaign platform. Only time will tell if the revival of “Trudeaumania”, first seen in the 1960’s when Mr. Trudeau senior came to prominence in Canadian politics, is translated into tangible impact in Canada and abroad.