With this weekend’s EU-Turkey summit, we asked two guest bloggers, who know Turkey well, to share their thoughts on recent elections and what the victory of the Justice and Development Party means for Turkey.

AKP: How Understanding Voters and the Opposition Was a Winning Formula – by Elmira Bayrasli

Elections are more than just about a winner or loser. For one they are a periscope into a society – its concerns and priorities. On November 1, an overwhelming 48 percent of Turks showed that their concerns are about stability as they, once again, reelected the Justice and Development Party (AKP).

Secondly, elections show how well parties and candidates running for office understand those concerns and priorities. In the recent Turkish elections, the AKP demonstrated that the party has a masterful understanding of citizens’ concerns. The party’s election campaign offers many lessons for Turkey’s other political parties. The AKP’s subsequent victory gives the government and its leader undeniable legitimacy and international clout – which will likely be on display this weekend as Turkish and EU leaders convene in Brussels.

The AKP came to power in 2002 on an inclusive campaign platform that pushed forward a clear vision for jobs, civil society, and progress in Turkey. The party backed that platform with an unparalleled grassroots organization throughout the country. It recruited women at the local level to reach out to voters. It empowered muhtars, village leaders, to discuss community issues and engage citizens. It had a command and control structure that disseminated information and guidance throughout the country – so that AKP members in Istanbul had the same talking points and instructions as AKP members in Kars, in the far east of the country. The AKP had one voice. It responded to voters. It took action to deliver services.

So what? You might say. This is what political parties anywhere would – or should – do. Not in Turkey.

Among the reasons for the AKP’s repeated success is not only its understanding of how elections are run and won but also the weakness of Turkey’s opposition.

Turkey’s main opposition party, the People’s Republican Party (CHP), was established in 1923, upon the creation of the Turkish republic. The CHP was the party of Turkey’s founder, Mustafa Kemal Ataturk. It has rested on that legacy ever since.

Content with garnering 25 percent of the vote, the CHP has lacked vision, organization, and a coherent platform for decades. Its current leader Kemal Kilicdaroglu is an immensely talented man but lacks charisma or the gravitas to guide the party to success. Turks who support CHP do so out of loyalty, not inspiration.

In addition to exploiting the CHP’s weakness, the AKP has successfully reflected the pulse of the nation – largely by navigating (some might say manipulating) it. In its heyday, the party focused on membership to the European Union. One of the AKP’s founders, and eventual leader, Recep Tayyip Erdogan implemented key reforms that not only pushed Turkey closer toward EU membership than any other moment in Turkish history. He did so while channeling Turkish pride and bolstering the country’s confidence.

Turkey’s economic and social gains over the last decade plus have corresponded with increased confidence among the Turkish people. As that confidence increased so too did Erdogan’s swagger. In 2009, Erdogan stormed off a panel at the World Economic Forum in Davos with Israel’s president, Shimon Peres. Turks, who have long felt marginalized by the West, went wild. It encouraged Erdogan to ramp up hostile rhetoric against the West: Israel, Europe, and the U.S. – and, for the most part, it has worked.

As citizens of any country, Turkish voters are interested in a stable future that promises opportunity and advancement. This is something that the AKP has understood and pledged in a country where most political figures treat politics as an entitlement rather than a privilege and a service. The party’s win on November 1 shows that regardless of whether the Turkish people like or dislike their elected leaders they are unsentimental and pragmatic in prioritizing their future.

Elmira Bayrasli works on entrepreneurship, global development, and foreign policy. She is the cofounder of Foreign Policy Interrupted and a lecturer at New York University. Elmira has written for Foreign Affairs, the Wall Street Journal, Reuters, and the New York Times. She lives in Brooklyn, New York and is the author of From the Other Side of the World: Extraordinary Entrepreneurs, Unlikely Places. 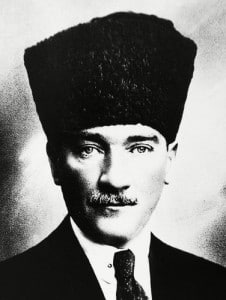 “So, is hanging a poster of Ataturk a political statement now?” asked an Italian friend pointing at a poster of him hanging on the shop across from us as we sipped on our beers in Istanbul’s secular district of Besiktas.

“Well, after these elections, it’s become even more of a political statement” replied another Turkish friend sitting across from him.

Though much can be said and analyzed, above mentioned conversation pretty much sums up the result of Turkey’s November 1 election, which granted Erdogan’s Justice and Development Party (AKP) a landslide victory with 50 percent of the votes, and 316 seats inTurkey’s 550-seat parliament.

Having come to power in 2002, Erdogan and his comrades have increasingly emphasized a “New Turkey” with morals rooted in Islam, and management growing similar to that of the Ottoman Empire.

Construction of a 1,150 room palace, figureheads representing military uniforms of former Turkic empires, Erdogan’s ambition to teach the new Turkish generation Ottoman language; one can see the comeback of Ottoman traditions in modern Turkey – even on theTurkish football league table with the presence of an Ottoman Spor football team.

Though resistance has always been there to ensure the survival of Ataturk’s secular state, the very norms he fought hard to erase from the country’s rule in 1920s with the collapse of the Ottoman Empire are now coming back, and with AKP’s landslide victory on November 1, Erdogan’s hand is much stronger to reshape the political sphere of the country.

The new political debate that awaits Turkey in the near future is a new constitution that will establish an executive presidency – Erdogan’s long standing dream.

In order to take a new constitution to a public referendum, a political party needs 330 seats in the parliament – just 14 more than what AKP currently has. While all opposition parties are against the establishment of a presidential system, pro-Kurdish Peoples’ Democratic Party (HDP) signalled their potential support in exchange for autonomy to Turkey’s mainly Kurdish populated southeast.

With Erdogan’s hand strengthened after the elections, the relative uncertainty lingering over what stance Turkey will take toward the refugee crisis and the war on Syria will cease. European leaders may find it easier now that Turkey is through with the temporary election government and has a stable long-term cabinet. However, given Turks’ fame in bargaining, Europeans may have to concede more to stop the mass migration of refugees.

All in all, while Erdogan’s November 1 victory may depress the other 50 percent of Turkey that did not vote for him, it may present a new opportunity to solve problems like Syria that may otherwise ensnare Europe.

Akin Aytekin is an Istanbul based journalist and has worked for BloombergHT, the Wall Street Journal and is currently employed by Reuters