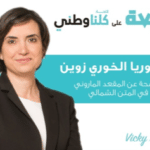 Our friend and former colleague, Vicky El-Khoury Zwein writes about her experience as a candidate in the recent parliamentary elections in Lebanon

Sunday night, right after the elections, Ricardo my youngest son, asked me if I was sad. I told him that I had no regrets and that’s a great feeling much more powerful than sadness. I told him that on this day, May 6, a lot of Lebanese won’t feel the same – I was talking about the people who did not vote.

Let’s go back to assess our strategy for these elections. We decided to be part of a coalition all over Lebanon and wanted to make sure that all “civil society” movements were unified. (I will stop a little bit on the nomination of these groups and agree that the moment we decided to be part of these elections we became a political player, the words “civil society” just represent this momentum created from outside the traditional political parties who were part of the system). Our strategy was to create a list all over Lebanon with 3 criteria; no alliances with parties from the parliament, or from the government, and no religious parties. Kollouna watani (we are the nation) was the only national list with consistent alliances all over Lebanon, presenting a total of 66 candidates in 9 districts. We focused so much on this coalition; it took us months and hundreds of meetings in order to create a political agreement and to announce our lists. That was a few weeks before the elections. A very short period for new groups, for “ordinary” candidates with very limited funding facing sharks with money and power.

Where Did We Lose? 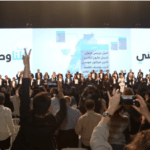 We lost when we couldn’t convince people to go and vote! We lost because more than half of the Lebanese people didn’t actually believe that we could do anything. They were scared of the violations, and they told us “they will never let you win”. Maybe we did not succeed to inspire them, or they didn’t trust us enough, they just did not vote!

Where Did We Win?

Well, we got one seat and almost 40,000 votes all over Lebanon (that’s what remained after thousands of violations [invalidating votes]). These 40,000 represent a new way of doing politics in Lebanon, represent people calling for a secular Lebanon, people saying that it is not OK; it is just not acceptable to break the law and the constitution, it is not OK to steal our country, it is not OK to live in a country with almost no rights, no security, no free education or healthcare, no infrastructure. It is just not OK. These 40,000 do not represent a specific sect or region. We are the only bloc in Lebanon with the real Lebanese diversity. 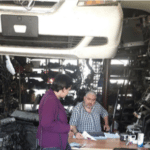 I refused to break any law by putting my photos in any public place; no photos on the walls or on the electrical poles, no banners on the streets while all other parties did it. I did not pay for any billboard; I launched a campaign on Facebook called #OnMyNeighboorsBalconies and #OnMyFriendsCars and I had my photos on peoples’ balconies and cars, some of them I didn’t even know. I did not do team building in a fancy hotel, it was over a campfire and a karaoke night. I did not buy any votes, I had a 5 O’clock tea as a fundraising event, and even though people in Lebanon are not used to this I had a lot of support either in cash or in-kind. During that event, my 2 sons played music as the entertainment. And most importantly, I based my campaign on canvassing, I used to go with my team and friends every day to a new city, distribute our program and brochures. I even participated in a rally paper, a voter education competition that allowed me to meet young and first-time voters.  Unfortunately, the enthusiasm we saw with these citizens and the messages I got every day did not translate in the ballots.

Raphael, my eldest son, told me “Mom, you can’t succeed in politics, people just love you, they need to be afraid of you that’s the only key for success in Lebanese politics.”

One day, I will prove him wrong; not this time, but one day.  I built my campaign on hope – not on fear – and I will keep fighting my way because I do believe in my Lebanon!

Vicky is a political activist and fighter for women’s rights. She is an elected municipal councillor and was a candidate for the Lebanese parliamentary elections in 2018. Vicky was elected twice as a council member at Sin El Fil municipality. In the Middle East and North Africa (MENA) region, she has trained thousands of women to develop political skills and capacity.  She has worked with municipalities in the MENA region on strategic planning and local development.  She is the director of ONDES, through which she links with women who won municipal elections through  ”She, For Lebanon” program. ONDES promotes socioeconomic development within communities and municipalities with a focus on citizen engagement, women inclusion and youth empowerment. Vicky is one of the founders of the “Women in Parliament” coalition, which was launched in 2012 based on her belief in the importance of coordination among all civil society organizations to support women to reach decision-making positions. Vicky is the head of the Metn district council at Sabaa Party and one of the party’s founders.

The Arabic version of this post is available on this link.