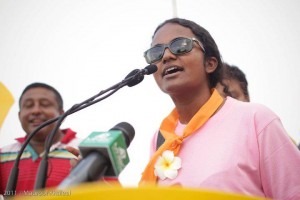 On December 17, 2015, 563 Members of the European Parliament passed a harshly worded resolution calling for sanctions against officials of the government of Maldives.

The resolution calls on the European Union and its member states to “Introduce restrictive measures in the form of targeted sanctions to freeze the assets abroad of certain members of the Maldivian Government and their leading supporters in the Maldivian business community, and to impose travel bans on them.”

It also calls on the European Commission and the member states “to issue comprehensive warnings about the Maldives’ human rights record to tourists planning to go to the country.”

Further, it says the European Parliament “is deeply worried by the constant erosion of human rights, including the misuse of the state of emergency by executive powers in the Maldives, and by the risk of further deterioration; reminds the Republic of Maldives of its international commitments regarding respect for human rights, including children’s rights and fundamental freedoms.”

You may wonder, what is going on in the Maldives, ‘paradise on earth’?

Maldives’ journey to democracy has not been an easy one. A thirty-year-old brutal dictatorship came to an end after democratic elections were held for the first time in 2008, the result of almost five years of agitation by pro-democracy forces. Mohamed Nasheed, a former journalist and Amnesty International Prisoner of Conscience, defeated the three-decade-old dictatorship of Maumoon Abdul Gayoom.

For the first time, Maldivians were unafraid to speak their minds, journalists enjoyed media freedom, people had the right to form political parties, the right to peaceful assembly, independent institutions formed, and a government based on the fundamental values of democracy and justice elected after a free and fair election. Maldives was a budding Sunni-Muslim democracy in the middle of the Indian Ocean.

However, the honeymoon did not last long. Although the dictator was removed, remnants of the dictatorship lingered. The proverbial deep state – those forces of the old dictatorship still entrenched within the security forces and the judiciary – were keen on sabotaging the new government. After three years, the newly formed government was ousted in a police and military backed coup d’état on 7 February 2012.

Since 2012, over 1,700 people have been arrested, investigated or prosecuted for participating in peaceful political activity – a right also guaranteed by the country’s new constitution. In the years since the coup, press freedom has been under constant attack with the Maldives falling in the global press freedom index to pre-2008 levels. Minivan News’ journalist Ahmed Rilwan has been missing since 8 August 2014. The moderate scholar and Member of Parliament, Dr. Afrasheem Ali, was brutally murdered on 1 October 2012. The rise of extremist interpretations of Islam has proliferated with an increasing number of young Maldivians seeking passage to Syria to wage Jihad in that country. 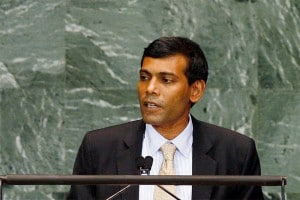 The deteriorating political environment in the Maldives took a nosedive after the arrest of President Mohamed Nasheed on 22 February 2015. President Mohamed Nasheed was sentenced to 13 years in jail by the Maldives Criminal Court after a whirlwind show trial lasting a mere 19 days. Since then the trial has been condemned by the vast majority of the Maldives’ bilateral and multilateral partners including the United Nations High Commissioner for Human Rights, Prime Minister David Cameron, US Secretary of State John Kerry, President of the European Parliament Marin Schulz, Amnesty International, International Commission of Jurists, United Kingdom’s Bar Human Rights Committee.

The imprisonment of President Nasheed sparked outrage both at home and abroad. People have come out on the street every day for nearly a year calling for his release. Maldives saw its largest anti-government demonstrations in 2015 where the government has responded with even more repressive measures. Citizens have been beaten, arrested, and unfairly dismissed from work for participating in protests. Most recently, the Minister of Home Affairs Umar Naseer banned street protests – a most extra-constitutional measure. The government has stooped to the most desperate of measures to ensure President Yameen remains unchallenged, including changing laws that effectively removed President Nasheed from his leadership position in the Maldivian Democratic Party.

President Nasheed continues to be the most popular political leader in the country. The fight for his freedom is not only about him. The unfair imprisonment of President Nasheed demonstrates everything that is wrong about the Maldives today. A politicised and biased judiciary has systematically prevented the continued fight for justice.

The entire state machinery focuses on keeping its political rivals in jail and eliminating all forms of opposition. Parliament has become an extended arm of the executive to rubberstamp the dictatorship. Independent institutions are blackmailed, intimidated or politicised. Security forces lack the leadership to address violent crimes including rising Islamic extremism. Politically motivated trials and intimidation silence non-government organisations and media.

The resolution passed by the European Parliament is a strong warning to the government of Maldives. It has come at a critical time where Maldivians need the help and support of the international community to reverse the return of a dictatorship.

The government of Maldives has continuously failed to abide by its international commitments and has become a pariah state. Continuous disregard of the Constitution and the Maldives’ obligations under international law will further isolate the Maldives. Failure to gain legitimacy both at home and abroad will ultimately affect ordinary Maldivians.

Shauna Aminath works for the office of the President Mohamed Nasheed.