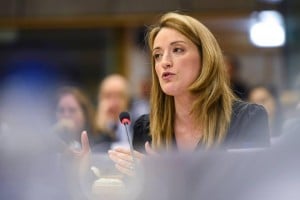 Guest Post by Roberta Metsola, Member of the European Parliament

The terrorist attacks in Paris shocked us all. Less than a week later we know that grief and anger must give way to a grim determination to counter this terrorist threat and to address both the immediate danger of more attacks and the causes of radicalisation that plague our societies.

These were no random attacks. Paris was targeted because Paris is the embodiment of what Europe stands for. They were planned to strike the maximum amount of fear into all of us and designed to make us feel unsafe doing the things we always do and living the lives we want to live.

We cannot let that happen. These attacks targeted everyone indiscriminately. It was not about religion or ideology. It was the same message we saw in Beirut, Tunisia, Nigeria and around the world.

It is true that the attacks in Paris have struck fear into the hearts of the people of Europe. We are grappling for answers as to how and why this tragedy happened, but we cannot not allow this to breed intolerance and hate within ourselves. This would play right into ISIS’ hands to turn communities in Europe into a fertile recruiting ground for their murderous cause.

It is clear that as a Union we need to do more to tackle the geo-political issues plaguing states like Syria and Libya. We need newfound impetus for the world order to come together and deny ISIS any gap to exploit. We need to see a unity government in Libya and work towards a situation in Syria that will see ISIS defeated and Assad no longer in power and no option should be off the table to ensure that happens.

We have seen that France has activated the EU’s “mutual-defence clause” for its EU partners provide support for its operations against ISIS. Every EU Member State should respond. Malta has said that it will help “in line with its constitution”. Let me be crystal clear. There is nothing in our Constitution that prevents us from helping in any way we can. This was an attack on us too. Now this does not mean sending troops, but can also mean helping in an operational scenario, sending aid, providing logistics and more and ensuring that Malta plays its role as a centre of peace in the region.

At the same time, we know that these terrorists were EU nationals who have lived in Europe and become radicalised along the way. We need a much stronger approach to radicalisation. We need to root out the hate preachers in our communities and look at what causes people to become susceptible to be radicalised. We need to come down harder on these so-called foreign fighters. These EU nationals, who go to fight in Syria or other conflicts and return to the EU to recruit more people, should face serious consequences for example, have their passports revoked or cancelled.

The worst thing that we can do is allow these attacks to redefine our values or somehow water down our standards. Refugees, by their definition are people running away from persecution, from terror, from death and Europe must continue to set an example to help give these people a future without fear. Our European values are exactly the opposite and it is those values that must form the basis of how we respond to these attacks.

We have to be realistic and not bury our heads in the sand.

As the Washington Post put so eloquently recently – “It is undeniable that the huge numbers of refugees and migrants reaching Europe do represent some kind of security threat — anything involving that many people arriving in such chaotic situations would. However, it is not only deeply unfair to paint all of those arriving with the same brush — it is also self-defeating….. What seems almost certain is that the Islamic State wants you to equate refugees with terrorists. In turn, it wants refugees to equate the West with prejudice against Muslims and foreigners” as a means to extend their propaganda and death cult.

People do have genuine security fears that must be addressed. This means that the management of our external borders has to be tight and strong. We need to know who is coming and where they are and we must insist that all Member States fulfil their legal obligations to, for example, fingerprint everyone arriving.

It is a dual approach that will see a humane yet strong border policy. It is a fine line but one that needs to be walked.

It will more difficult now to bring up my children in a culture without fear, but we must persevere, we must continue to live our lives despite the apprehension we must all feel and we will.

Roberta Metsola is a Member of the European Parliament from Malta in the Civil Liberties, Justice and Home Affairs Committee and is the Nationalist Party’s Shadow Minister for EU and Foreign Affairs