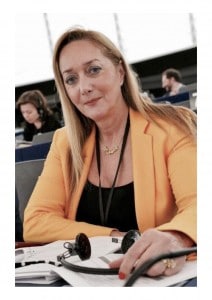 Guest post by Marlene Mizzi, Member of the European Parliament

November 25, is designated as the International Day for the Elimination of violence against women. The origin of this day started in 1960 when three Dominican sisters were cruelly assassinated for opposing the Trujillo dictatorship.

Since then, 25 of November has become the International Day for the elimination of violence against women in remembrance of the Mirabal sisters. It is a day for global recognition for the existence of gender violence and crimes against women. This day is a tribute to each and every woman around the world who is experiencing, or has experienced violence at some point in her lifetime.

On this day, governments, international organisations and NGOs organise activities to raise awareness of the fact that women around the world suffer and are victims to rape, domestic and other forms of violence.

Violence against women has always existed. However, it is only recently that the world has begun to address this as a real problem, as a brutal form of discrimination and most importantly, as a violation and abuse of women’s fundamental rights. Despite its international recognition, violence against women continues to be a global reality for millions of women around the world.

The European Commission affirms that one in three women in the EU have experienced physical and/or sexual violence since the age of 15 and that 75 % of women in a professional job or in top management have experienced sexual harassment.

Gender-based violence could happen to everyone and could take many forms – psychological, physical or sexual. No one is immune, regardless of social background and personal character of the victim. It can happen at home, at work, at school and with the new technologies increasingly taking over our lives, it also happens online.

The scale and true nature of this problem are often hidden. The fact that one in 3 women has experienced physical or sexual violence is proof that we have completely failed to grasp the full scale of this problem. This will not change until countries around the world have different definitions and understanding of what constitutes abuse and violence against women. How can you fully grasp an issue if a problem in one country is legal practice in another?

Sadly, violence and domestic abuse remains one of the least reported crimes. For a variety of reasons women choose to remain silent. The fact that many incidents are not reported means that many offenders can act with impunity, while all too often, they don’t even realise their wrong doings. In many cases a women who resorts to the policy for protection finds no solace. On the contrary, she is made to feel guilt for having been the cause of the violence. Every time that society chooses not to address this problem it is itself committing a crime against abused women.

The direct and indirect costs of limiting the active role of women in society are enormous and very often unquantifiable. It is clear that the needs and the rights of women are currently not being met in practice and that in some countries this problem is not even addressed as a mainstream policy issue. Therefore, violence against women is an extensive human rights abuse that the EU cannot afford to overlook.

Violence is not inevitable and can be prevented! This is an area in which Europe can reach out and make a difference. The European Union needs to take a leading role in promoting and further enhancing international efforts and commitments to fight domestic abuse and violence against women. Prevention strategies should be holistic, with multiple interventions undertaken in parallel at all levels of policy-making.

As a start, the EU must ensure that all Member States have signed and ratified the Council of Europe Istanbul Convention, which demands more protection of women. Secondly, the European Commission needs to adopt a legislative framework and a European strategic plan, which addresses violence against women in a comprehensive and sufficient manner across all EU policies.

Last, but not least, we need to raise awareness. We need to encourage positive action from society and enhance community mobilization to change social norms and create an environment, where women can report incidents, can get justice and receive the emotional support they need. We need a real cultural change within our communities and society. We need to change people’s perceptions about this pressing matter and to explain that domestic abuse is not a private matter and violence against women cannot be tolerated by society. The European Commission needs to mark 2017 as the EU Year to end violence against women.

There is no better place to start with than the International day for the elimination of violence. To mark this day, the UN Secretary-General’s UNiTE to end violence against women campaign invited everyone to participate in the “Orange the world” campaign. Orange symbolizes a brighter future for women without violence. Orange events are planned in more than 70 countries around the world. In fact the European Parliament in Strasbourg will participate in the global initiative.

Will you show solidarity and wear orange?