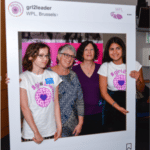 Our democratic institutions are based on the idea that all fringes of society should be encouraged to get involved in decision-making. However, far too often, large sections of the population are absent from decision-making processes: Where are women? Where are people of colour? Where are young people? Where are gender-non conforming people? Where are disabled people? Where are poor people? All of these categories are represented by a few individuals in our governments and parliaments. But these individuals, such as my feminist Roma colleague Soraya Post from Sweden, are the exception: there is a structural lack of representation of many groups inside our society.

Women and girls, in all their diversity, are hugely underrepresented in public and political life. In my work as a member of the Women’s Rights and Gender Equality Committee in the European Parliament, I spend a lot of time fighting for a feminist future. We are at a crucial moment in history when many governments and organisations across the world have launched a crackdown against women’s rights; sadly the word “feminist” is often meant as an insult.

I do believe that our future is feminist, but our feminism needs to be diverse and inclusive. Our policies must be intersectional, in order to take into account and give a voice to all women, not only white, rich, or gender women. Of course, it is important to have these women represented because they are a part of society – but they should not represent all women. As a Member of the European Parliament, I believe that in addition to gender mainstreaming, policy-makers should also make efforts to apply intersectionality- mainstreaming in their policies.

Many intersectional feminists have explained how women at the intersection between two types of discriminations (sexism and racism for instance) see the world differently. Their narratives matter and they must be heard in order to build truly inclusive policies that lead the way towards full equality. Democracies are best functioning when all interests and points of view are represented, when we discuss and try to come to common agreement, finding compromises between our differences. Sadly, up until now, only certain interests have found representation in the political sphere.

If we want all of us to be represented in our democracy, girls‘ participation is the way forward. Not only do we need to make sure they all have access to a quality education that can give them the keys they need to participate in politics in the future, it is also essential to involve them in decision-making in the present. As young people, their voices should matter. They should be building the future they want, and their elders should not silence them, belittle them or make them feel guilty for seeing the world differently.

Political representation will never be achieved if girls’ human rights are not respected and advanced. National governments and international institutions have a duty to put in place efficient policies that will allow girls to have their human rights respected. This means eliminating female genital mutilation, giving girls access to reproductive health and menstrual sanitary products, fighting against rape culture, child marriage, and gender-based violence. If we do not face these problems head on, there is very little chance that we will be able to involve girls and women in the political sphere. They must be free from these burdens in order to take on this challenge.

Often, we are under the impression that these problems only affect developing countries. But it is time we stopped closing our eyes to the fact that women and girls also have their human rights violated in Europe. Child marriage does exist in Europe, and rape and feminicide continue to happen on a daily basis. Another problem in Europe is the inadequate social policies that have fostered poverty and social exclusion. As we know, girls and women are more affected by austerity policies than men. They have higher rates of unemployment, and lower incomes than men. As they are often responsible for other people (like children and elders), they participate in a sector of the economy (the care sector) that is not socially valued or financially acknowledged. The solution to this issue exists but is often overlooked: we need generous social policies with a specific focus on gender.

Women and girl’s representation in the political sphere has implications in many different policies. We must change the way we see politics, and the world. We must finally acknowledge women as humans – in politics, and everywhere else.