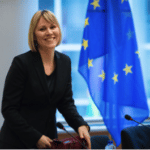 One week before author Sylvia Plath took her own life in the same apartment as her two little children were playing she wrote: ” The woman is perfected, her dead body wears the smile of accomplishment”.

Women in politics, business and public life are hampered by the strive for perfection. We learn that if we are to succeed we have to look perfect, have the best grades, wear the smartest outfits and always be better than everyone else. Above all, we have to suck up to men and bring other women-competitors down. This is of course putting it bit hard, but the fact is that little girls are taught that ”a good girl” is a girl who doesn’t argue (with men). A ”good girl” is silent but ambitious, pretty and not loud-mouthed, thorough, neat and tidy. These norms are almost the opposite for young boys. These norms are breakable and we need to break them in order to create a more equal society. A society that is up for the task in tackling all challenges we’re facing, and were individuals can thrive and detect and solve problems differently.

Little girls eventually grow up to become women. The good girls become ambitious women who we know work full-time but also ”should” have time for a family, a partner, a house, some friends, travel and of course: never forget to take care of herself. The worst thing a successful woman can do is to not care about her appearance. Striving for perfection is killing our future woman-leaders. That is why a successful strategy towards gender equality is to teach women and girls not to care too much, not to be so bloody ”perfect” all the time. Good enough should be the goal. Only then will we see more women in politics, business and science.

I want to say to all girls growing up: you shouldn’t be afraid to make mistakes. To truly fulfill your ambition, you need to fail many times. It’s only trough failures we learn, and you have to try many times at something to really know your field. Knowledge is power, and looks soon fade away. Knowledge doesn’t. Remember that if you have a rich inner life like imagination and self-confidence that is something that no one can take away from you. A good way of getting to that stage is to read books, reach out to mentors who can support you, and try to find your own way. You can be who ever you want to be.

To all my women colleagues I want to say that we need to support each other to truly break with traditional norms. Women also to a large extent play by ”men’s rules” by competing and bringing each other down. Men also have to change. We have to open up the private sphere for men, so that men also can be present parents with full control of lunch-boxes, out-door wear and Saturday activities for the kids. Perhaps that is the single most important reform that would ensure women’s full participation and create a ”levelled playing field” for the better of both women and men in public life.

Most women and men don’t want to choose between a career and a family. We want to have both and we should be able to be both. But even in my home-country Sweden, which often ranks very high on gender equality indexes, you can hear that women politicians should be ashamed of going for public office when having small children. ”You ask for too much” and ”why do you have to do everything at the same time” are frequent statements put to women politicians. The ones stating these things are often older colleagues in public life, not acknowledging the fact that we have the same ratio of women in high-level positions in both .business and in science as 40 years ago. It’s like they are saying ” we didn’t make it so neither should you”. This makes me so disappointed. And I become even more certain that the mechanics of society is not constructed for people but for the system itself. Women are not the problem, the norms are and how they are constructing our work places. The only field in Sweden, which can boast of having an equal representation of women and men, is politics, and that is solely because of quotas in party lists.

I think I made all possible mistakes you can do in politics. And still, here I am: member of the European parliament and first vice chair of my committee. I have two small children. I don’t work 50 hours a week. I ran on a feminist agenda in the election in my home country. I didn’t know the party-elite (I was even so bold to criticize them from time to time). But I think voters find me genuine and honest (at least I hope so). And if there is one thing the European project needs, it is more honesty, more gender equality and more women in the work force.

Linnéa Engström is a Greens/EFA Member of the European Parliament from Sweden.